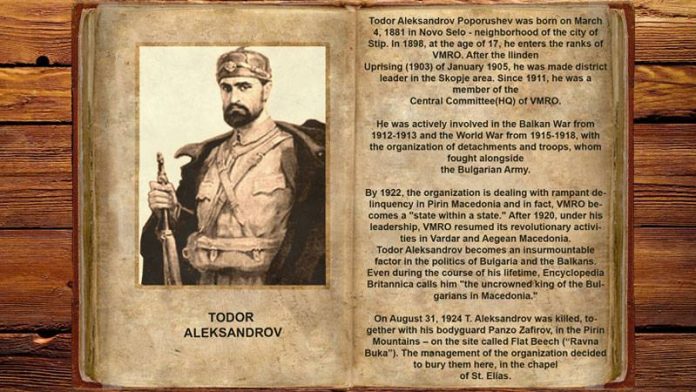 Todor Aleksandrov Poporushev was born on March 4, 1881 in Novo Selo – a neighborhood of the city of Stip. In 1898, at the age of 17, he entered the ranks of Internal Macedonian Revolutionary Organization (IMRO)/ (VMRO), due to the merits of Hristo Matov, the director of the school in Skopje. For a while, Todor Aleksandrov taught in the enslaved territories. After the Ilinden Uprising (1903), he plays an active part in rebuilding the organization and participates in most congresses. In September 1911, Todor Aleksandrov and editor Daniel Krapchev funded the issuance of the newspaper „Vardar“ with money from VMRO.

During the summer of 1912, Todor Aleksandrov led a small detachment, with whom he moves to into the vicinity of Kilkis and Thessaloniki. Just before the announcement of the Balkan war, he is the orchestrator of a series of attacks in Thessaloniki and its surroundings. During the Second Balkan War, Todor Aleksandrov wrote a letter to Prime Minister Ivan Evstratiev Geshov and King Ferdinand, which argued, that for VMRO, autonomy has always been one means of preserving, above all, the integrity of Macedonia with a view on its future and the annexation to Bulgaria.

During World War I, Todor Aleksandrov was appointed officer of orders at the headquarters of the division with free access to the offices of the Prime Minister.

After the war, „Oldie“, as Todor Aleksandrov was called, together with Alexander Protogerov, took on themselves to resume the work of the organization but in 1919 they were arrested. After their escape, they went underground and took a leading role in the affairs of VMRO.

By 1922, the Organization is dealing with rampant delinquency in Pirin Macedonia, which is an area of Macedonia, that has seen an upturn after the war. Not only did the rebels already have uniforms but they were also introducing district and country authorities, point-chiefs, regional detachments and militia. VMRO became a „state within a state.“

On August 31, 1924 Todor Aleksandrov and his bodyguard Panzo Zafirov were killed in the Pirin mountains, just above the village of Sugarevo. Members of the Organization decided to bury them in this place.

„History alone will fully assess the personality and role of this man. But the fact, that during the course of his life he triumphantly entered the legend, shows how great his impact was on the lives of his contemporaries. That place was earned by Aleksandrov through his own personal qualities: unyielding willpower, a strong character and perspicacious mind put in sole service of a great national ideal: the liberation of Macedonia. Todor Aleksandrov was one of those Macedonian activists who tried most carefully to not create hazards in Bulgaria due to his activities. In this respect he was a visionary and a great Bulgarian.“

„Aleksandrov, during the course of many years, was the uncrowned King of Bulgarians-Macedonians, who almost worshipped him.

In folk tales, Todor Aleksandrov is seen as the last king of the mountains.“